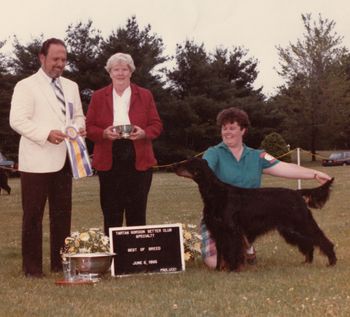 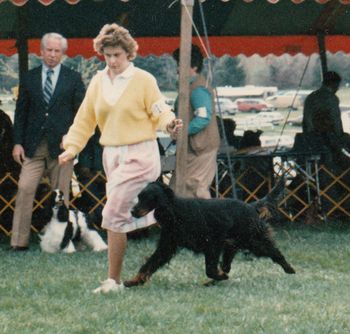 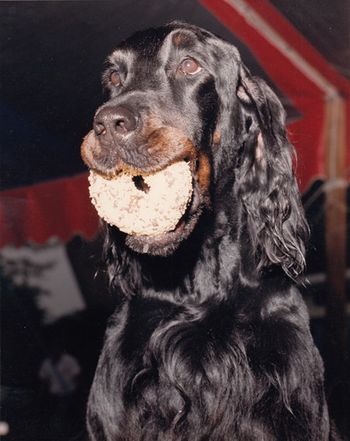 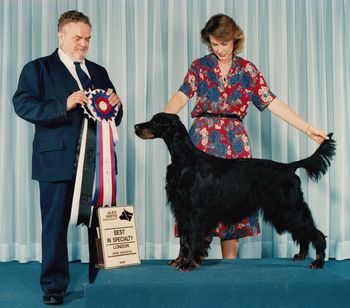 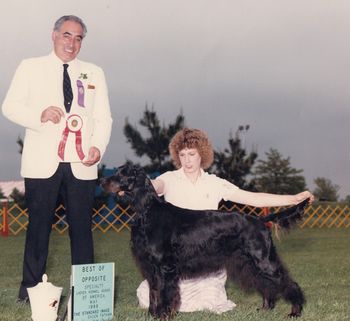 Heather was my first Gordon, and I couldn't have asked for a better partner to travel through the journey of learning about the breed, dogs shows and whatever else we wanted to try. In August of 1981, when Alison Rosskamp asked me if I wanted to help her take puppies from her Mom's first litter to their very first dog show, I thought "what the heck" ... I didn't have anything to do that Sunday. So the day before the match show after my usual Saturday morning riding lesson, I went over to Alison's house so she could show me how to "stack" and "move" the puppies. She showed me how do gait them in a "triangle" and "up and back". She gave me the bitch they were keeping - "since she was the easiest". I knew it was because the one boy "Duffy" was really Alison's favorite. The next morning in the Rosskamp's stationwagon packed with 3 puppies, we were off to Eisenhower Park. And the rest is history... :-)

Heather and I became a team and eventually Mrs Rosskamp offered me a co-ownership on Heather. She and I went to handling classes, obedience classes and then dog shows ... lots and lots of dog shows. Her first title was her CD earned before her 2nd birthday. Then Mrs R decided to breed Heather and she had her first litter in April of 1983. The following spring she finished her bench championship. In 1985 Heather was "specialed" while I traveled with professional handlers Laddy & Candy Carswell.

Highlights of Heather's show career included her BISS @ the first TarTan independent specialty held in Wallingford, CT in 1985 - owner handled by me!! She also won the Gordon Setter Club of Ontario 1988 specialty in London, Ontario on her way to completing her Canadian championship and as a veteran was BOS @ Paumanauk GSC (1988).

She was such a sweet, wonderful girl and willingly went along with anything I wanted to do or try. She gave us two wonderful litters and her kids were just as sweet and wonderful as she was. She taught me so much and was a terrific start to my life in Gordon Setters. All of my Gordon's can be traced right back to Heather!