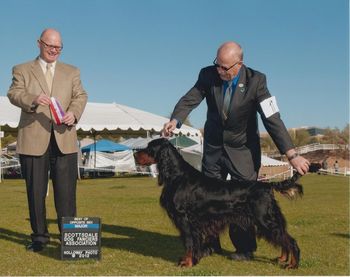 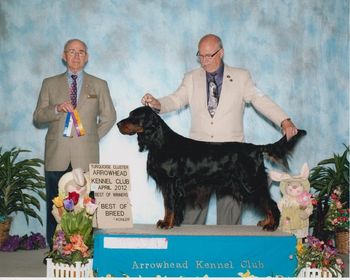 When I was able to convince Vader's owner, Viv McLoughlin (Kqrac) to send frozen semen to me for Shea - she immediately said that she wanted a puppy from the litter, not a stud fee. But, instead of shipping a puppy to her in Australia, she wanted to co-own the puppy with her friends Gary & Bev Andersen (Omega) in Scottsdale, AZ. Striker flew with Kristin & I to the specialties in Greeley, CO where we were met by friends of the Andersen's who had driven from Scottsdale to Greeley for the shows. We said goodbye to our little boy and he's been a buddy to the Smooth Fox Terrier girls of the Andersen's ever since!

On April 8, 2012 Striker finished his AKC Champion title @ Kachina KC. He finished with three major wins all owner handled by Gary. Congratulations to the Andersen's and Viv McLoughlin. Stiker is his dam's 5th Champion.

The Andersen's lost Striker way to young, a couple of months shy of his 8th birthday. His terrier buddies miss him terribly as do we.