Dam: Am Ch Fair Isle And I Love Her

Tate was in a litter co-bred with my friends the Hunsinger's born on Christmas Eve and raised at their beautiful property in south central Pennsylvania. Tate's registered name - Blythe Yule is Scottish for Happy Christmas. Tate's mother is Martha, from my "Love The Beatles" themed litter and his sire the beautiful Gordon we had met as a youngster our 2nd trip to Australia "Ice". He grew up to be a multi BIS winning Gordon who's biggest accomplishment was Best In Show @ the Adelaide Royal!

Tate entered the show ring for the first time in early September 2021 in preparation for the National only a couple of weeks after. He was quite the star his first weekend out earning a total of 5 points toward his title from the 6-9 Month Puppy class over older competition.

Tate returned to the ring in April 2022 @ the Peach Blossom Cluster in Perry, GA. Shown @ 1 of the all breed shows for "practice" before the weekend specialties - Tate won BEST OF BREED over top ranked Gordon champions for a 5 point major! Then followed up with Best of Winners @ the first specialty for another 5 points and finished his Champion title. At the Sunday Specialty he only participated in the Puppy Sweepstakes and was Best in Sweepstakes! To say this puppy has had a career (so far) is quite an understatement. 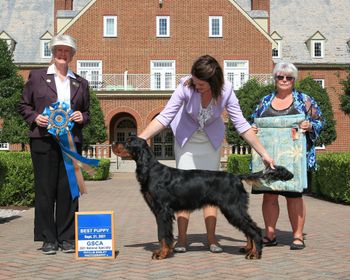 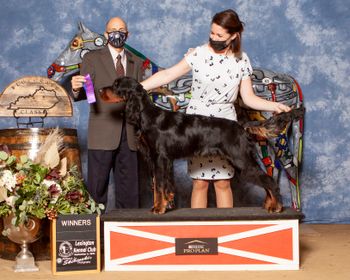 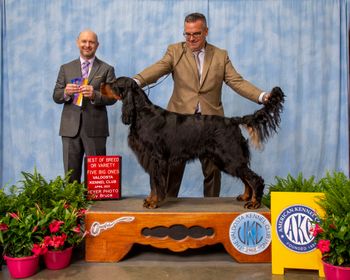 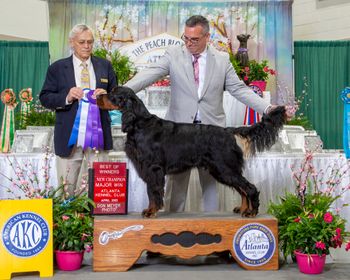 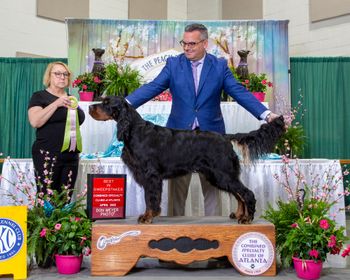